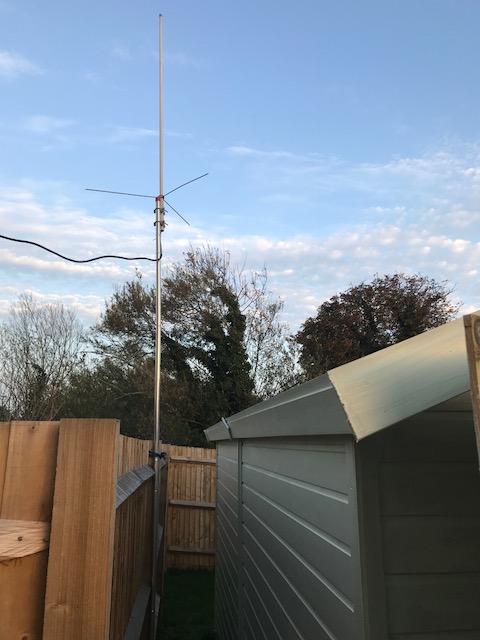 First of all, I was issued the Notice of Variation (NoV) from Ofcom on Friday 3rd November 2017. That means I can now run GB7RMS on the Amateur Radio Packet Network for all local ‘Hams’ to use.

I still have 5 short ‘tweaks‘ to make to the BBS scripts but I am awaiting some help from Bernard in France. He will be supporting me imminently ~ which includes linking RMS into other nodes. I hope to have completed this within a few days. So please watch this space!

As you would have gathered from my previous post, GB7RMS has a special place in many of our hearts. Matt (M1CMN) sent me this information & has given me permission to reproduce it here:

“I first encountered GB7SEK in DECEMBER 1989 shortly after being introduced to Packet radio by Jim, G0NOH.
At that time, it was run by it’s founder Dave G4IDX in Ashford.
He did a superb job, with barely any outages for a further two years, when the service started to become a little erratic.
When I enquired, Dave told me he had changed his job, and had an edition to his family and was unable to devote so much time to the BBS as before and he might have to close it down.  I asked if I could help, and as a result, became remote sysop.  This continues for a while, but then Dave had to move and the BBS was shut down.
Not wishing to lose such a useful facility Keith, G1EIA was persuaded to take on the BBS, but we had to change the call sign and obtained GB7RMS  (for Romney Marsh). We were able to use the name SEK for the node, as a tribute to all of Dave’s hard work and pioneering spirit in starting the first packet BBS in Kent.
I remained as remote sysop and this arrangement worked well, despite some (unorthodox) too ing and thro ing  of the BBS to temporary locations at times.
Sadly, in September 1993, Keith died suddenly and we had to move the BBS.  It ended up at the home of Ron, G1UTF who had housed the BBS from time to time for Keith.
Again, I remained as remote sysop and the BBS carried on, despite the occasional setback from time to time.
After a few years, Ron had to move, but we were able to relocate the BBS at the home of Larry, G7FHB at Bethersden.  I stayed as remote sysop and, despite some difficulties, this arrangement worked quite well for a couple of years, but finally, Larry had to give up and for a time, the BBS was closed down.
Although several local Amateurs had offered to house the BBS, these locations proved to be “unsuitable” for various reasons.
Finally, Matt, M1CMN offered to take on the BBS and after much hard work by Matt, the relevant permissions were obtained and GB7RMS was reborn, better, faster and now enjoys internet links for mail and dx, plus conferencing world wide.  As usual, I am, once again remote sysop, the user base is growing and the BBS is running well with Matt keeping a strict eye on it.  All the equipment, which at one point, after Keith’s death, had had to be bought by the users, has now been replaced by Matt at his own expense and as such is now his own personal equipment. All the old computers and rigs had passed their useful life some years ago.  Matt has some great plans to improve the BBS, but as in all things, this costs money, so if you would like to help keep GB7RMS as up to date as possible, any contributions would be gratefully received.  To make a contribution, contact either Matt, M1CMN or Stan, G6ZNW.
We hope you will continue to enjoy all the facilities of GB7RMS for many years to come, and we welcome your input with any ideas for improvement you might have.
Our grateful thanks go to all those sysops who went before us and made the packet network  what it is today, and with your help, we hope to improve it for the future.“
[Matt, M1CMN and Stan, G6ZNW]
Thanks both for an interesting piece on the history of GB7RMS. No pressure for me, then!
My aim is to carry on the good tradition of others that went before me and, due to the technology behind the BBS now benefitting from a huge leap in technology, making the experience of users even better!
More anon ……………
73 de John G0GCQ