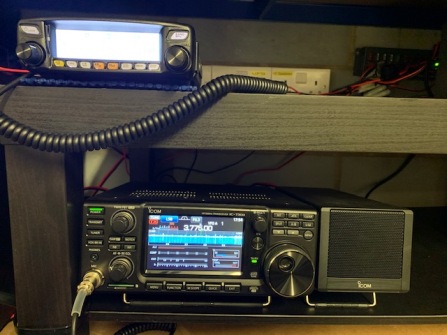 Okay, so after nearly three years in our new house, I finally have time to get the shack fully operational. I just wish the time found was due to better circumstances.

So, basically, my shack is made up of three ‘tables’ in a U-shape. Straight ahead lies the table that holds my Yaesu FT-2000 kit (lower photo in collage), and to the right is a shelf unit which holds the power supply for my Yaesu Quadra amp, IC-7300 and the ID-4100 (top photos ~ more another day). To the left is another table holding my ‘Office’ PC, a TV linked to Amazon, and my soldering station.

So, it is getting there, but there is plenty more to do! I hope to spend more time tomorrow progressing this project. Hopefully I will be able to update the blog again in 24 hours.

Just a  quick bit of news (photos coming later) to let you know that GB7RMS was switched back on today at 13:50Hrs UTC.

All is running well.

As you can tell, I have not updated this blog for so long. Remiss of me, and yet there has been nothing to report ……… until now!

It will be back on again before the end of the day.

I will then post new images, etc., on this blog.  Connections by RF remain the same, but there will be a little tweak for those of you who Telnet in ……….. but that should not affect you as a user of this service.

A belated Happy New Year to you all

I recognise that there has been a long gap between my last post & this one. This is due to spending much time getting the BBS, Node, and DX Cluster (all part of the FBB Linux distribution) to work and, of course the Christmas & New Year celebrations with friends and family. A busy period ~ but much fun!

In the photo above, you can see the Navico AMR1000S providing the RF link on 144.950MHz, the connected PacComm Tiny 2+ TNC (in Kiss Mode), the shack webcam atop the TNC, and the Raspberry Pi to the right of the radio/TNC.

The Pi 3 is running on a 32Gb SD card, allowing plenty of room to store the many messages that are received each day!

The learning curve, for such a capable program as FBB, has, at times, appeared steeper than vertical :-)))) It has been very challenging at times but very rewarding and much fun. I don’t regret the effort, but I do feel slightly sorry to have left you wondering when it was all going to work?

I could not have achieved this all on my own. There were several points where I just could not make something happen ~ usually because I didn’t know where a particular file or script was, and/or I was not sure how to change it. Luckily I was able to find a great mentor, Bernard F6BVP [http://f6bvp.org], who lives in Paris. He was able to ‘hold my hand‘ and guide me through the difficult points, as well as telnet in when things became very puzzling, often for both of us, or just plain tricky! We both agreed that we learnt things ……… especially me! Learnt I have, that’s for sure, including keeping careful notes and a backup of the SD card!

For users that want to use the internet, however, either on their phone, tablet or PC/Mac, then they can either use Telnet or SSH. This also means users can be drawn from further afield.

For BBS telnet to work, each individual needs to pre-register with me so that I can set the remote flag up: name, callsign, qth, and preferred password to g0gcq [at] yahoo.co.uk

One of the nice things is that, when logged-in to the BBS, if you press     c     followed by [Return], you enter chat mode. You can hold quite a large group discussion, or just with a single user, the choice is yours. Good for a club net, or chatting to a friend oversees?

There are a few other things I would like to try, over the coming months, including adding a few more nodes. I am, however, going to leave the system to run for a couple of weeks before I do any more ……… I need the break & I also want to see how it fares 🙂

There are 12 registered users for telnetting into the BBS so far & I hope to see that increase as well.

Thanks Bernard, it was une expérience formidable!